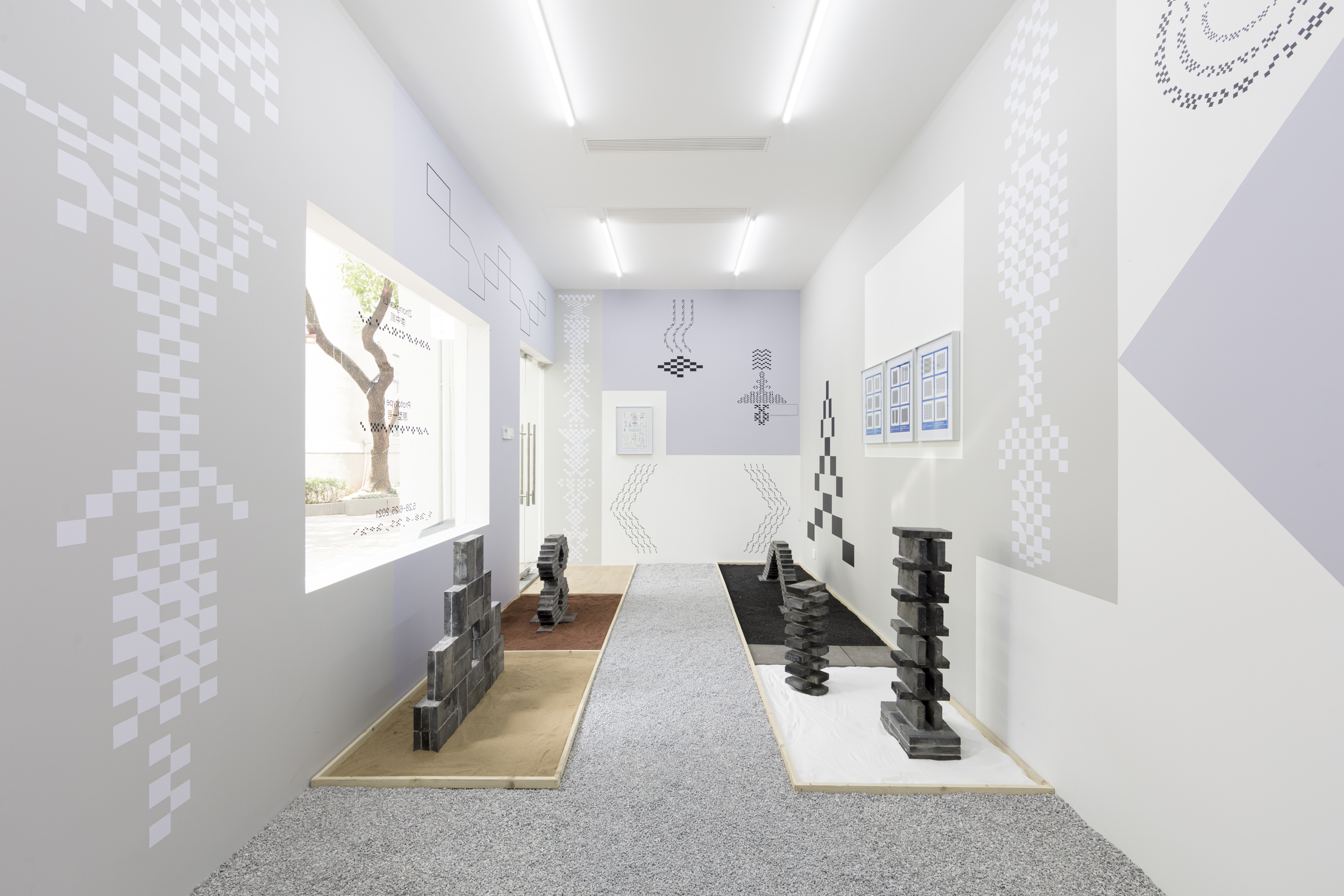 IS A GALLERY presents the work of Zhongkai Li in Prototype I, the artist’s first solo exhibition in Shanghai. Prototype I is curated by artist and critic Ernest Arthur Bryant III and is open from June 1 to June 25, 2021.

Li’s work is informed by his multidisciplinary experience as a printmaker, painter, and designer. In Prototype I, Li constructs a site-specific space by installing sculptures, risograph prints, and wall paintings formed with his original typeface, New Language No. 1. Though the risograph prints exemplify Li’s approach to space on paper, the artist also takes special care to color, print on, and provide shape to the walls and floor of the gallery, treating physical and three-dimensional space as he does two-dimensional, portable space.

Prototype I draws from Li’s memories of visiting Suzhou's gardens in the Jiangsu province in China. Some loose nodes in these memories now work in the narrative of the gallery space. Different “conceptual spaces” in the gallery are filled with different stones and minerals (black galaxy granite, red volcanic rock, quartz sand, perlite, sand from the Kubuqi Desert) and provide different macro encounters. Movement through the gallery around artificial stone sculptures also bring changes in a landscape across time, space, and memory.

In the micro-landscape of the immediate exhibition, the tension between the natural structures and the gallery space demonstrate the artist’s outlook: “These rocks may have existed before humans existed, and they sneaked into human existence quietly. In our daily lives they continue to influence the way we view the world; maybe, eventually, when cities no longer exist and we no longer exist, they will still move forward in the dark." The caves are faint, the light and whispers are not far away. The subtle rhythm of the sound when the soles of the shoes touch the uneven stone road, the silhouettes of plants overlapping behind the partial walls and the windows. Li transmits these sensual and intermittent details. Through the re-understanding of space, works, body, and materials, the clues of memory lie in various associations and hints in the exhibition’s layout.

Digitality underscores the organicism of Li’s garden-thought. To create wall paintings with a typeface, Li instinctively extracted and worked against his training as a painter by tapping his keyboard, using shortcut keys, copying and pasting, and relying on other modern typing methods to create typed forms. Li’s thinking about recurrence and impermanence is reflected in his work process, summed up as “from the digital, to the digital.”

"Text and image are not important anymore. The final output does not mean the end, and the symbols and symbolic meaning behind the output are no longer clearly communicative. At this time, the symbolism is dying and is completely open," Li writes. The artist hopes to find the relationship between the hierarchy, functionality, and emotional boundaries of language through open spatial expression, forgetting the common role of language, which is to define.

By including Li’s RISO prints, a space is made within a space, printed gardens within a three-dimensional garden, like a garden within the world. The prints’ compositions can be wild and soothing at once, intelligent and asymmetrical, like they made their own decisions about how to be grown. In his use of language, typography, color, and layout, Li uses the traditional tools of the designer to introduce gallery patrons to the ideas and pacing of the garden, which is full of content while remaining mysterious and empty of total human understanding.

About the Artist
Zhongkai Li received their MFA from the Yale School of Art in 2019. Li’s work explores the interoperability of impermanence, prototypes, iterations, contemplative image-making, and garden studies. His work has been shown at Maharam, New York, the French International Film and Art Book Festival, the Scotland Graphic Design Festival, the Golden Bee Global Biennale of Graphic Design, the New Haven International Film Festival, the CICA Museum, Korea, the Central Academy of Fine Arts Museum, Nanshan Museum, and the Yale University Art Gallery. Zhongkai Li received the Sanyu Scholarship from the Andrea Frank Foundation, the Yale School of Art Scholarship, and the First-Class Scholarship from the Central Academy of Fine Arts.
‍

About the Curator
Ernest A. Bryant III, L.P.I., is an artist and critic from the USA. He has a background in interdisciplinary art. In his work he uses nature, video, image-making, history, positionality, theory and humor to examine the ontological conflicts that arise between different aesthetic and cultural values. Currently, Bryant has been developing a method of augmented drawing that he describes as “a form of drawing that uses line and mathematics to explore value, labor and its displacement.” Bryant earned an MFA from Yale University, School of Art, where he focused on critical theory, new media, and printmaking; and earned a second MFA in Art Writing & Criticism from the New York School of Visual arts, where his focus was art and society’s relationship to nature, “molestation,” conservation, and homelessness.