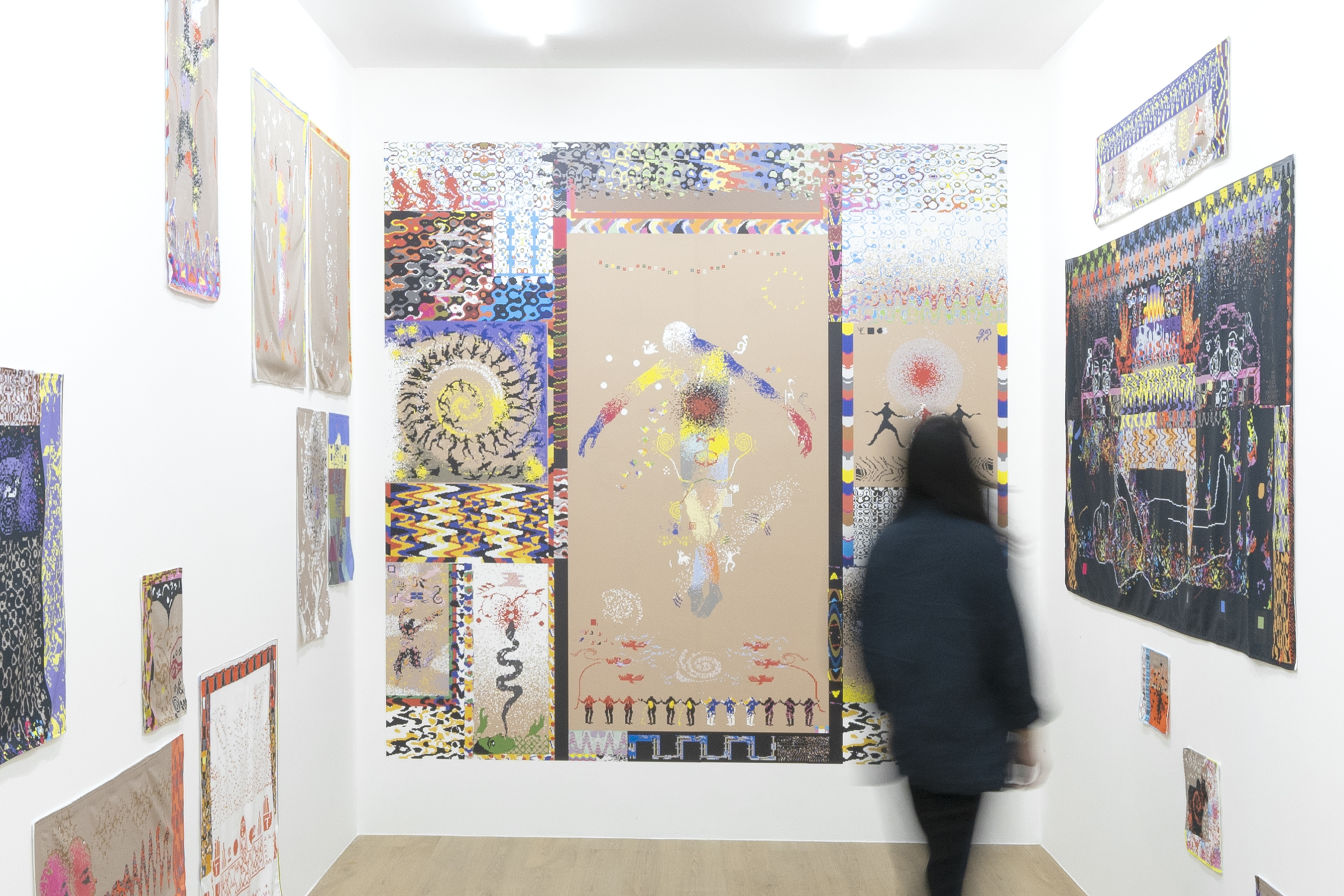 Bhatt is an artist and designer with a practice that is deeply embedded with an alternative genealogy of images and their symbolic meanings. Heartbeats of a Cave is a collection of works that contend with the labour of visual production, its ritual reproduction, and mythic encounter. The show brings together 28 new drawings, printed on fabric across the full length of the gallery to create a total environment and to transport the viewer to a simultaneous place of reverie and restraint.

To listen to the cave’s heartbeat is to be attune to the rhythms and cycles of what resides deep down in an elsewhere that is hidden far from view. It is to invoke a daydream, for the cave is a space that Bhatt identifies as a point which “holds both openheartedness and downheartedness, where the deep capacious now asserts it presence.” Caves are primordial spaces, as a crease or fold within the earth’s crust, they create an interior surface of potentiality, where time and memory are suspended. The seashell features as an object akin to the cave, one where Bhatt seeks to define a sense of mythic disorientation and depictive disbursement – an experience eclipsed.

Kathy Acker describes the beauty of a seashell as being “so open that all the oceans and fluids of the earth, of the body are heard through [it]… that it turns itself inside out and makes a snail-shaped labyrinth that leads to the future.” A transfiguration with corporeal implications. It resonates in the way a heart is, but two veins entangled together and enlarged into a beating echoic chamber, an expanded interior that then creates the ability for re-constriction and collapse. Bhatt draws inspiration from these intricate interrelations to modulate between the gaps of space, meaning, contrast and form. Through listening to the faint yet persistent pulse that pervades across Heartbeats of a Cave, the artist uses a series of motifs to “search of new deeper landscapes and unknown accents”, in the careful articulation between focus and blur.

The image stops and starts with the labour of a hand. Present across the works, many fingers to allow for a way to communicate and connect to the world within the image’s pixelated surface. An outstretched palm is an invitation or an indication that entry is barred. These symbols operate as a set of points and markers to the sequence and speed of a silent score that accompanies the viewer. The hands as supply and supplication, they signpost Bhatt’s process, “I like to chase big feelings. I try to feel them as I draw.”

Heartbeats of a Cave is an ache from afar, a collection apart and aflame. The exhibition charts a location navigable only in its auto-dislocation, present purely in the oscillations that course through shaded hollows and subtle frictions.

About the Artist
Somnath Bhatt is a designer, artist, and writer who lives between Ahmedabad and New York City. His work has been shown at MoMA PS1, Art Week Dubai, the ICA London, and Mécènes du Sud Montpellier-Sète, among other venues. Selected clients include Instagram, the New York Times, Reebok, HYEIN SEO, and the musician Nicolás Jaar. He also works as a contributing editor at MOLD Magazine and AIGA Eye on Design. Somnath believes in the power of the unseen, the chaos of myths, and that labor has the right to all that it creates.

About the Curator
Moad Musbahi is an artist and curator based between Tripoli and London. He is currently co-curating with the Harun Farocki Institut the roaming research and exhibition project, ‘Taught to Travel’, on the pedagogical practices and forms of knowledge that movement engenders. He recently curated ‘In Pursuit of Images’ at the Architectural Association, London (2020) and was on the curatorial team for ‘Rights of Future Generations’, for the inaugural Sharjah Architecture Triennial, Sharjah (2019). His work has been presented in Project Arts Centre, Dublin (2021); Protocinema, New York (2021); Sonic Acts, Amsterdam (2021); Jameel Arts Center, Dubai (2020); Beirut Art Center, Beirut (2019) among others. His writing has appeared in The White Review (2021), Kayfa-Ta Press (2020), AA Files (2019), The Funambulist (2018), among others.  He is a recipient of the Goethe Visual Arts Project Fund (2021), the EU’s All Around Culture Grant (2021), the Sharjah Art Foundation Production Programme grant (2020) and recently was in residence at Gasworks, London (2021).