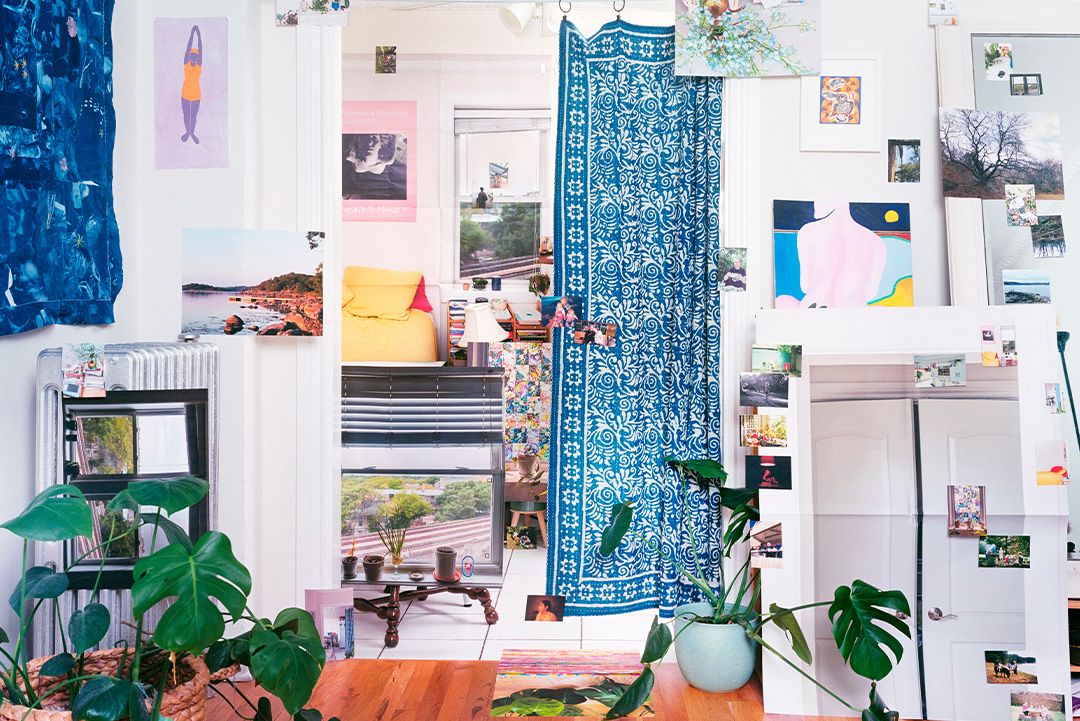 Guanyu Xu’s Suspended Status depicts an artist caught in a web of red tape. The work on view for this exhibition comprises images from his ongoing series, Resident Aliens, as well as a large grid of images that he calls Suspension. Both bodies of work use visa status in the United States as a means of framing images that depict people who are suspended between countries and cultures. Their futures hang on faceless state agencies in a churning political current.

In Resident Aliens, Xu makes his images inside the homes of willing participants who are visa holders. He constructs temporary installations inside their homes from previously printed images of the same interiors and an assortment of their personal ephemera and photographs. The resulting final image breaks the interior into visually puzzling quadrants. The compositions confuse the simple domestic spaces and create what appears to be a hall of mirrors that his camera captures. Suspension depicts one hundred forty-four out of more than five hundred documents that Xu collected for his O1 visa paper work. Collaged over this is a semi-cartographic digital drawing of the streets of Shanghai, Xu’s own photographic works, and collected media images that relate to the pandemic and hate crimes. Xu writes that these materials “represent the ways in which the state obscures its power and creates obstructions.”

About the Artist
Guanyu Xu (b.1993 Beijing) is an artist currently based in Chicago and a lecturer at the University of Illinois at Urbana-Champaign. Influenced by the production of ideology in American visual culture and a conservative familial upbringing in China, Xu’s practice extends from examining the production of power in photography to the question of personal freedom and its relationship to political regimes. He negotiates this from the perspective as a Chinese gay man. In his work, Xu migrates between mediums like photography, new media, and installation. These movements operate similarly to his displaced and fractured identity.